Facing what it calls a “tidal wave” of merger filings, the Federal Trade Commission has warned companies that Hart-Scott-Rodino Act reviews will now take longer than usual and that transactions could be challenged well after statutory deadlines regardless of when a deal was initially investigated. The FTC cites a surge in merger filings and limited resources for the delays.

In a statement posted Aug. 3, 2021, Acting Director of the FTC Bureau of Competition, Holly Vedova, reiterated that the HSR Act requires companies to provide the agency and the Department of Justice advance notice of transactions exceeding the current threshold transaction size of $92 million. According to the statute, the government has 30 days to determine whether a “second request” is necessary for additional information or to sue to enjoin the transaction. If a second request is issued, the deal is put on hold to give enforcers time to evaluate the competitive implications before the merger may be consummated. The lack of a challenge does not mean a deal is “approved”; the antitrust agencies can challenge a deal even after it has closed, Vedova emphasized. But the expiry of the waiting period (as may be extended by a second request) traditionally offers the merging parties comfort that their transaction will not face agency challenge on antitrust grounds.

This year things are different.

The FTC “has been hit by a tidal wave of merger filings that is straining the agency’s capacity to rigorously investigate deals ahead of the statutory deadlines,” the statement reads. The FTC provided its monthly HSR figures (see graph) which it calls “astounding.” The pace slowed down as the pandemic took hold, hitting a low point in May 2020 before beginning a rapid acceleration toward a spike in November 2020. Filings in July 2021 were nearly three times those seen in July 2020. 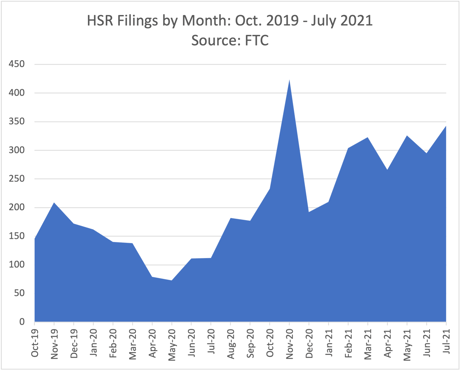 “We believe it is important to be upfront about these capacity constraints,” Vedova continues. “For deals that we cannot fully investigate within the requisite timelines, we have begun to send standard form letters alerting companies that the FTC’s investigation remains open and reminding companies that the agency may subsequently determine that the deal was unlawful."

Vedova warned merging companies that this will create a layer of uncertainty that they must be equipped to handle. "Companies that choose to proceed with transactions that have not been fully investigated are doing so at their own risk. Of course, this action should not be construed as a determination that the deal is unlawful, just as the fact that we have not issued such a letter with respect to an HSR filing should not be construed as a determination that a deal is lawful.”

HSR filers thus face a strategic decision if, upon the expiry of the statutory time period, the agency still has not completed its investigation.

Parties can either wait for the investigation to conclude or close their transaction despite the risk of a legal challenge. Experienced HSR counsel should be consulted to ensure maximum clarity and comprehensiveness in their filing and for a rigorous analysis of the risk of consummating a transaction after the time periods have expired but before the agency has completed its investigation.