Since February 2020, staff members at the Federal Trade Commission have been studying past acquisitions by Google, Amazon, Apple, Facebook, and Microsoft – several years’ worth of deals that did not require reporting to antitrust authorities because the deal sizes fell below regulatory requirements. FTC Chair Lina M. Khan says the study reveals “the extent to which these firms have devoted tremendous resources to acquiring start-ups, patent portfolios, and entire teams of technologists—and how they were able to do so largely outside of our purview.” She said the Commission’s enforcement actions have focused on how these companies “buy their way out of competing.”

The study demonstrates the “systemic nature of their acquisition strategies,” Kahn said.

Commission staff have been analyzing the terms, scope, structure, and purpose of transactions between Jan. 1, 2010, and Dec. 31, 2019, that did not have to be reported to federal antitrust authorities under the Hart-Scott-Rodino (HSR) Act. The inquiry focused on 616 transactions valued at or above $1 million, excluding hiring events and patent acquisitions. The companies provided the information in response to special orders from the FTC.

Under the HSR Act, proposed transactions that affect interstate commerce and are valued over a prescribed size threshold must be pre-reported to the joint Pre-Merger Notification Office of the FTC and the Antitrust Division of the Department of Justice. The size thresholds are adjusted each year. For 2021, the HSR threshold for transactions (under which the transaction need not be pre-reported) is $92 million. Reported deals that the antitrust agencies believe may lessen competition “in any line of commerce” or may lead to a monopoly are subject to being blocked by a federal court injunction which the FTC or DOJ obtains by filing a complaint and suing the parties to the proposed transaction. 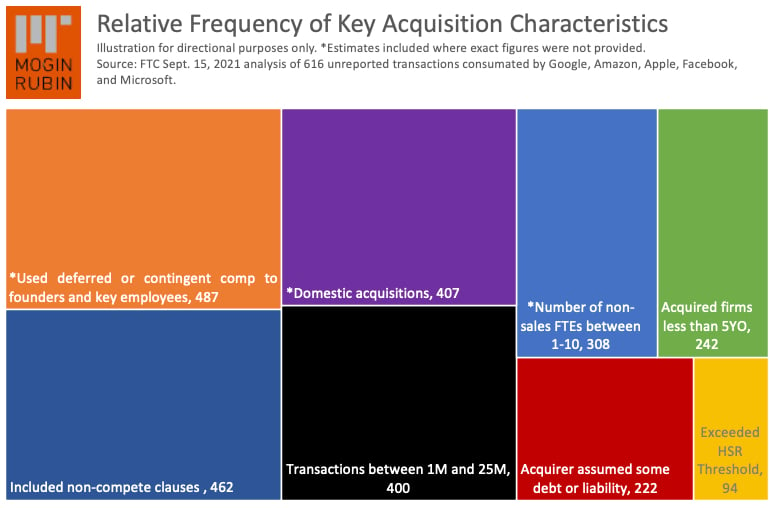 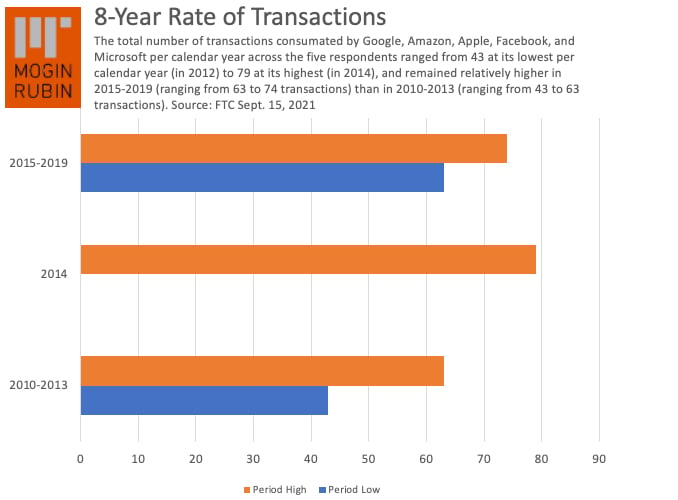 The FTC’s retrospective of non-reportable mergers by the dominant digital platforms is a commendable first step toward modernizing the criteria promulgated under the HSR Act for pre-reportability of mergers. The data suggest that the current regulations fail to require reporting of strategic mergers that can have long-run anticompetitive effects. We await with interest the modifications that may be inspired by the revealing results of the Commission’s study.

Founding partner Jonathan Rubin focuses his legal practice exclusively on antitrust and competition law and policy. Based in Washington, DC, he has litigated and led trial teams in major antitrust cases throughout the country. He has published in influential academic journals and has spoken to numerous professional groups, including the Directorate General for Competition of the European Commission, the Antitrust Section of the American Bar Association, the University of Wisconsin, and the American Antitrust Institute. He has also made several appearances before Congressional committees.